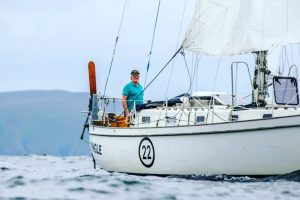 I was lucky to be born into a loving home on the banks of the River Shannon in Limerick City. From a young age, my father (also Pat) would bring myself and my siblings on the water rowing, sailing and fishing.  At first it was in a traditional West Kerry boat called a Currach (tarred canvas over timber frames). Then on a 22′ plywood sailboat he built himself in the garage beside our house. At the age of twelve I made my first boat, a 14′ punt for above the tidal waters. Next I built a 23′ angling cot. The River Shannon was a mighty play-ground for a young boy to have behind his house.  At the age of fourteen the ‘Asgard‘, a 51-foot sail-training gaff-rigged yacht, sailed into Limerick. My Father was asked to help pilot her down the Shannon. He brought me with him. A memory I will never forget, the power she had as she tacked down the Shannon on a out-going tide.  Two years later after leaving school, before starting an apprenticeship as a cabinet-maker, myself and my brother Jim sailed from Waterford to France and back on her. The river had moved into the back-seat after my first proper sea passage, another memory I will never forget.  During my younger years I followed the OSTAR, Golden Globe Race and other sea going adventures while my father regaled us with stories of many great Irish explorers and adventurers including ‘Brendan the Navigator’, the first person to cross from Europe to America. (Christopher Columbus actually sent for his log before sailing to America nearly 1000 years later.) I also learned of Tom Crean, the Arctic Explorer.  My father also took us to visit the grave of Edward Conor Marshall O’Brien, born in Limerick on 3 November 1880. O’Brien’s boat ‘Saoirse‘ was the first small boat (42-foot) to sail around the world, rounding all capes; a journey that he documented in his book ‘Across Three Oceans‘.  O’Brien’s voyage began and ended at the Port of Foynes, County Limerick, Ireland, where he lived.

In 1976 I raced from Plymouth to Tenerife. In 1988 I completed the round Ireland race, and also the dinghy and cruiser racing. I had a few sailing boats. A 23′ timber yacht named “Outlaw“, an Elizabethan 29 and a yachting monthly half tonner I made in Ferrocement. I enjoyed them all.  In 1990 I moved to Ballyferriter in Co.Kerry to go to sea as a fisherman. A fantastic job, one of the last of the hunter gatherers. Over the winters I saw the power of the North Atlantic. In 1992 I went to Iceland and purchased a 126′ fishing boat, named ‘Bylgja‘, passing through the Arctic Circle whilst rounding Iceland’s North Westerly Cape Horn on our way home. Another good memory as the Northern lights gave us a show that night. Thirty years later I still live in Ballyferriter with my wife Rita and two of my four children, Catherine & Deirdre. Tony & Helen are settled close to us, I am luck to have a healthy caring and supportive family.

I have always dreamed of sailing in a race solo around the world and when the affordable Golden Globe Race turned up I just had to go for it. The boat I have chosen, a Saltram Saga 36 is capable of winning, I can but try my best now.”  Pat believes the challenge of this race is not the lack of technology, but time alone and raw seamanship. Pat said “It is most important to keep the deck free of unnecessary items, to avoid wind pollution”. As a fisherman, Pat has seen the amount of rubbish coming up from the bottom of the deep ocean, and is eager to get the message out, about the unnecessary use of Plastic. Pat plans bringing his oil paints to sea, trying to capture the open sea on canvas, in all its glory. As part of Pat’s preparation for the GGR 22, he will sail through the Artic Circle as he did over 20 years ago, North of Iceland and over to the USA where he will sail up the Hudson River to visit the place of his great great grandmother (an Native American Mohican Indian) and many more places besides.

About my Father In 1986, at the age of 60, my father sailed solo across the Atlantic to Newport, Rhode Island in a twenty eight foot yacht ‘Iniscealtra‘. The following year, in 1987, at the age of 61 he sailed from Newport back to Limerick.  Two years later, 1989, at the age of 62, on his first attempt to sail around the world, he was rescued 1,200 miles west of Capetown by a Norwegian freight ship, having suffered storm damage, and suffered the loss of his ‘Iniscealtra‘. The following year, 1990, at the age of 63, in a thirty two foot yacht ‘Loon‘ he set off on a second attempt, which was abandoned in Brazil after storm damage.   Pat had the boat shipped back to Ireland the following year and attempted to sail around the world for a third time at the age of 67 in 1993. Three years and three days later at the age of seventy, on the 23rd July of 1996, Pat successfully sailed back to Limerick, the first Irishman to complete a solo circumnavigation of the globe having lived and fulfilled his life-long dream.   After he returned, we sailed together around the SW of Ireland and this was one of the few times he would open up about the hard side of being alone at sea for long periods.  My father had (and still has) a huge influence on me. You can view my father’s site here 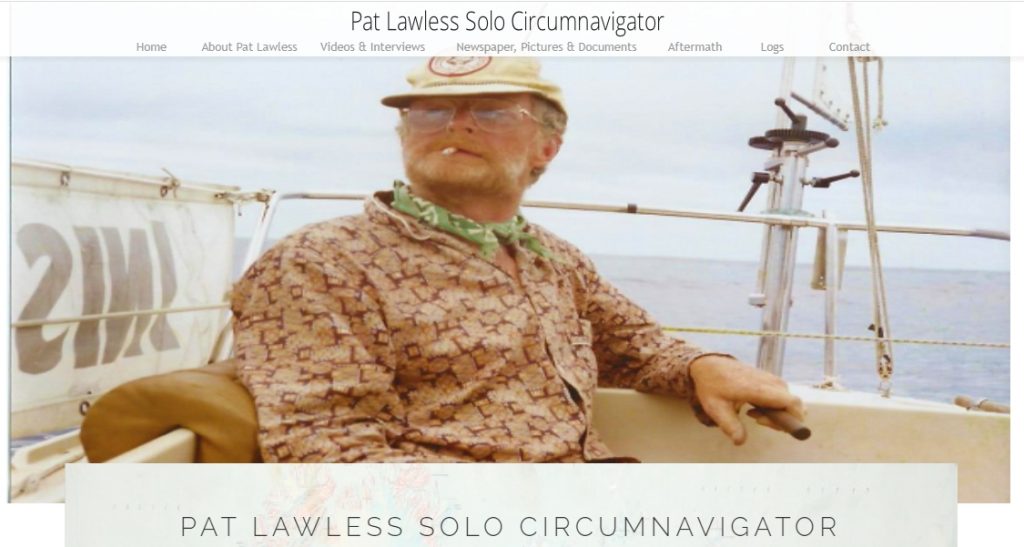 Text from Dad this morning.. ☎️"Lovely trade wind sailing. Wind getting lighter as we move North. Listing To 12233 most days at Noon SSB"☘️☘️☘️His own live tracker here..my.yb.tl/patggrlawless ... See MoreSee Less